Home > About > News and Views > Being a ‘diabetes dad’ 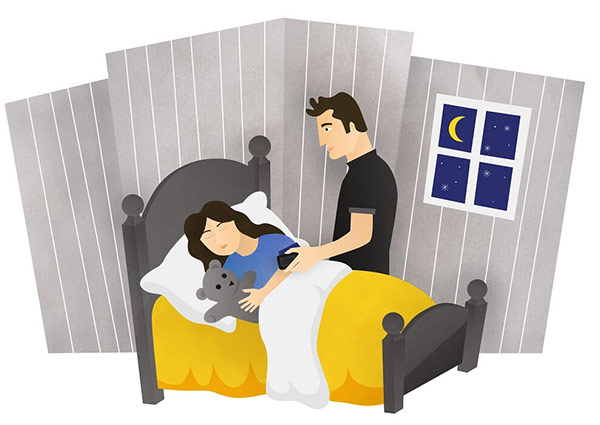 When a child has a chronic condition like type 1 diabetes – which requires intensive management and thoughtful decision-making every single day – the role of the parent is incredibly important. We saw just how important this was at our recent #freetodream event at the Peter Harrison Planetarium.

Dads of children with diabetes play hugely important roles. In two-parent families, care may be shared between the parents, depending on their work commitments.   Some dads describe how they have taken charge of what their child is and isn’t allowed to eat: like all parenting decisions, it’s often a matter of allowing them small treats now and then – or on special occasions – while keeping a careful eye on their usual daily diet and making them intimately aware of good nutrition guidelines.1

Sometimes dads become diabetes advocates, form groups with other dads and make it their personal mission to demystify diabetes and dispel some of the popular myths and misconceptions.

One dad explains: “Being a d-dad is an earned title: You don’t get it just because your child’s pancreas no longer works. On the most basic level, you have to be able to care for your child’s diabetes. That to me is a no-brainer. You don’t have to do it exactly as the d-mom does it. You just need to do it.”2

In other households, care may be taken on almost exclusively by one parent – and sometimes it’s the dad.  A stay-at-home father who plays this role3 explains that he and his wife took the decision that their daughter’s day-to-day care should be handled by one parent only, because passing her management back and forth led to too many high blood glucose readings.  He describes how, over time, he became a little resentful that his wife was not more closely involved, while in turn she grew to feel guilty that she wasn’t contributing enough, despite being the family breadwinner.

He advises, in such situations, honest and open communication – not only about the physical and intellectual demands of diabetes care, but also the emotional ones – can be really important.  For example, if one parent seems disengaged from their child’s care, they are most probably not uncaring, but may simply be frightened that they might make a mistake.

But even with the most careful care, diabetes can be maddeningly unpredictable. One dad has described how his two daughters, who both have diabetes, can “eat the same amount of the same thing, and play the same length of time and yet their blood sugars will head in radically different directions.” 1  And Dan Piper, a young man who himself has type 1 diabetes, and whose father and grandfather had it before him, writes in his blog that taking care of diabetes continuously involves “small sacrifices, costs, mental efforts and time commitments”.4  He adds “usually after a check-up or a visit to my specialist I'm full of motivation to get my glucose levels to near God-like levels of awesomeness and have total control of my diabetes rather than it have control of me.  But then there are days where the world is against you and everything else is taking priority and stabbing yourself just doesn't come high up the list of things to do.”

As Dan says, regular glucose monitoring can be one of the most challenging aspects of care in type 1 diabetes.  But it’s one of the most important things a parent of a child with diabetes needs to do.

At our #freetodream event at the Peter Harrison Planetarium in March one of the fathers described how greater freedom in his son’s life has been achieved by using the glucose monitoring device called the Freestyle Libre flash glucose monitoring system. The system measures glucose levels using a small scanning device (a reader) and a wearable glucose sensor, with no need for routine finger pricks*. He adds that the liberation from routine finger pricks has been accompanied by greater confidence that his child’s glucose levels are being effectively monitored, since detailed information is generated by the device.ƚ

New technologies like the Freestyle Libre system are assisting in making the lives of people with diabetes easier and more convenient.  And new gadgets are certainly something that many ‘diabetes dads’ may find appealing!

ƚFor a complete glycemic picture, scan once every 8 hours.

Carers are worth their weight in gold

Carers are so important to so many people to help…

Three Tips For Taking Care Of A Child